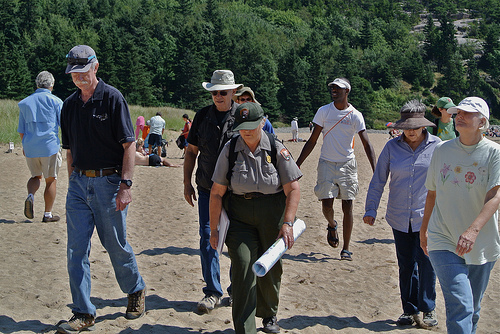 The U.S. National Park Service Interpretive Ranger depicted above will remain nameless, but it was my good fortune to spend a few hours with her one morning this August. We hiked over big rocks along the ocean in Maine’s Acadia National Park. Honestly, I learned more about rocks from this interpretive ranger than I remember from classroom geology. We also learned about the land’s social history – gifted by J.P Morgan, as a vacation home for a generation of “rusticators” (why isn’t that word more popular?), and ultimately to the National Park Service early in the 20th Century.

The ranger also patiently answered my questions about her experience as a public servant. Years before she retired from a career teaching of high school science and other subjects, she fell in love with the nature and geology of Mount Desert Island. She told me she applied four times before landing a Park Service position and, like many other NPS rangers, she is seasonal, meaning she is employed for only part of the year. But, like the other rangers I encountered during 10 days in Acadia made, this encounter made me think of what Philip Selznick’s Leadership in Administration (1957) calls distinctive competence – basically, the idea that organizations develop special commitments and capabilities that infuse normal activities – such as a park ranger leading a hike – with institutional values. The idea inspired a truly massive scholarship in strategic management. Here are a few illustrative results from a search of Google Scholar:

While Selznick’s (1957) case material draws heavily on public organizations, including the Tennessee Valley Authority, the State Department, and divisions of the U.S. military, the tradition of scholarship applying Selznick’s ideas to American public administration is relatively small. BTW: A Google Scholar search of “distinctive competence public administration” yields a number of articles by my predecessors on the VT-CPAP faculty Gary Wamsely, Charles Goodsell, and a number of their students.